Client spotlight: With help from Legal Services for Entrepreneurs, Founder of Polyglotte Keyboards thrives in the tech world

Daniela Semeco speaks English, Spanish, French and German fluently, and she’s in the process of learning Italian, Portuguese and Russian. But for this Latina technology entrepreneur born in a bilingual and technological household in Caracas, Venezuela, the process of securing patents and trademarks was an area where she needed some help. That’s when she turned to Legal Services for Entrepreneurs (LSE), a project of the Lawyers’ Committee for Civil Rights of the San Francisco Bay Area (LCCR).
Semeco has always been surrounded by languages and computers. When she was two years old, her father received a scholarship to study at Georgia Tech, and soon after her family relocated to the U.S. Later hired by IBM, her father encouraged her fascination with computers from an early age. She recalls, “seeing the whole evolution of the computer. I remember when they were huge, no one knew what a computer was and my father would take me to work with him and tell me that computers are the future.”
Semeco’s fascination with technology was matched only by her desire to see the world. She studied abroad in France, Venezuela, and Germany, where she realized her ability to pick up languages. It’s also where she realized that language is what brings people together all over the world. 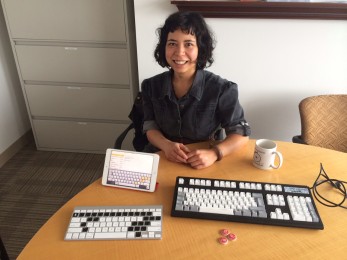 That’s when it clicked. The keyboard, she realized, hadn’t changed in 150 years. So she set out to create a keyboard that could include different language formats in a single unified layout. Hence the “PolyKeyboard” was born.
Despite Semeco’s undeniable technological prowess and linguistic ability, she ran into some obstacles. It was difficult to be a female entrepreneur in a male-dominated industry, where so few people of her background had taken a similar path. She consulted with her father, who assisted her frequently throughout the development of her business, often making calls on her behalf. The reason, according to Semeco, was that it would make a difference in responsiveness if there was a man’s voice calling.
In addition to overcoming gender based barriers, Semeco also ran into challenges in securing a patent for her invention. That’s when she came to LSE looking for legal help. As part of the LSE program, she was matched with pro bono attorneys from Morgan Lewis & Bockius LLP, Ropes & Gray LLP, and Davis Polk & Wardwell LLP. Rochelle Alpert and Stephanie Hall, attorneys from Morgan Lewis & Bockius, assisted Daniela with forming an effective strategy to protect her trademarks. They are currently pursuing the patent “Multilingual Keyboard,” registering her “Polyglotte” mark, which has passed registration in the United States, and seeking protection for her intellectual property abroad as well. In addition, attorneys from Davis Polk & Wardwell helped Semeco. According to attorney Rochelle Alpert:

Daniela has been a model client. She wants to do the best she can for her business to create strong protectable marks for her products and services. We look forward to watching Polyglotte grow and flourish.

Keyna Chow, Semeco’s attorney from Ropes & Gray, further commented, “I had an extraordinary experience getting to know her, and she really caught my eye with her talent and inspiration.”
When asked about how LSE helped her achieve her dream of inventing a keyboard, Semeco replied:

LSE has changed my life forever. I never would have been able to pursue a patent on my own. It’s been extremely fulfilling. I feel more imaginative and excited about life.

All of this success happened because of the hard work and dedication she put into creating her invention.
When she is not working on her keyboard, Semeco is working part-time as a San Francisco tour guide, interpreting for doctors’ visits, working at a gallery, and taking pictures of people around the San Francisco Bay Area. Even though she has all these responsibilities she is always thinking of ways to improve and expand her multi-lingual keyboard. As of today, the keyboard has 20 languages (see list below). Thanks to her many mentors and her ambition to break through gender barriers in the technology field, Semeco was able to realize her dream and continue doing what she loves most.
To learn more about Semeco’s invention, visit her website at www.polykeyboards.com.
You can also download her polykeyboard app here.
If you’re an entrepreneur looking for legal help, visit our Legal Services for Entrepreneurs (LSE) page to learn more.
KEYBOARD LANGUAGES TO DATE –