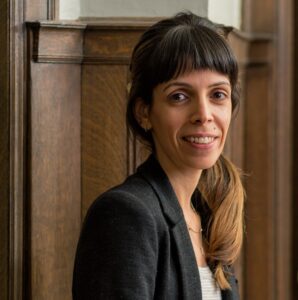 Lolita Brayman is a versatile attorney with experience in pro bono mentorship and training and executing new models for remote clinic operations. Prior to joining LCCRSF, she represented immigrants and asylum seekers in removal proceedings and before USCIS, including dozens of minors from Central America, who fled gang recruitment and violence. She also represented numerous Detroit-area Iraqis who are subject to longstanding final orders of removal. After law school, she was a public interest fellow with the Immigrant Defense Project in New York.

Lolita received her JD from Brooklyn Law School and her bachelor’s degree from the University of Michigan. She also holds a public policy master’s degree in international conflict resolution and mediation from Tel Aviv University. She lived in the Middle East for two years, where she worked as an editor for the Israeli newspaper Haaretz. She’s conducted “Know Your Rights” seminars and Asylum Workshops at the U.S.-Mexico border in Tijuana, Mexico, volunteered with Syrian refugees in Gaziantep, Turkey and Amman, Jordan and in refugee camps in Israel and the West Bank. She has been published in The Nation, Foreign Policy, the Washington Post, Reuters, the Guardian, National Geographic, among others. Lolita is also the daughter of two Soviet refugees and speaks Russian fluently