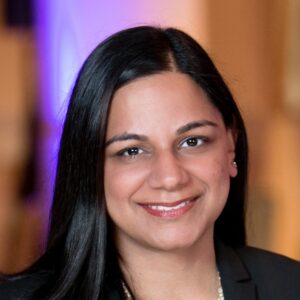 Monika Kalra Varma has dedicated her career to human rights and social justice work in the United States and abroad. She returned to her native Bay Area to serve as the Executive Director of the Lawyers’ Committee for Civil Rights of the SF Bay Area (LCCRSF), the oldest civil rights institution on the West Coast. For over 50 years, LCCRSF has worked to dismantle systems of oppression and racism by partnering with community organizations and pro bono attorneys to protect and promote the rights of people of color, immigrants, and economically marginalized individuals by fighting injustices, transforming legal systems, and building a more equitable and just world.  Monika is leading the organization to a number of victories, including, the repeal of an unconstitutional loitering ordinance in Oakland, a federal court ruling protecting immigrant youth in California, the legalization of public banking in California. From working to end the criminalization of poverty to building more racially and economically inclusive communities, LCCRSF is setting precedents that are being used by advocates across the country.

Monika previously worked as the Executive Director of the D.C. Bar Pro Bono Center, the largest provider of pro bono legal services in the District of Columbia serving 20,000 individuals, nonprofit organizations and small businesses. During Monika’s tenure, the Pro Bono Center received several awards, including the American Bar Association’s Harrison Tweed Award for long-term excellence in increasing access to justice. Monika was also one of four members of the D.C. Bar’s executive team, setting the strategic direction and policies for an organization with a budget of over $37 million  and 100,000 members.

As the Director of the Center for Human Rights at the Robert F. Kennedy Center for Justice & Human Rights (RFK Center), Monika and her team partnered with social movement leaders domestically and internationally, providing long-term advocacy, legal, and direct programming support. Their groundbreaking strategies and advocacy campaigns advanced movements to ensure a right to health in Haiti, end untouchability in India, rebuild the Gulf Coast after Katrina, increase access to justice in Chad, and stop modern-day slave labor conditions faced by migrant farm workers in Florida.

Prior to the RFK Center, Monika worked as an associate legal officer with the Office of the Prosecutor at the U.N. War Crimes Tribunal for the former Yugoslavia, where her trial team secured the Tribunal’s first conviction of the crime of terror against General Stanislav Galić, the Serb military commander in Sarajevo from 1992-1994.

Monika is a graduate of University of California, Davis School of Law. She is the proud recipient of the 2016 South Asian Bar Association of North America’s Public Interest Achievement Award and the 2019 recipient of the Northern California South Asian Bar Association’s Public Interest Award. Monika is married to attorney Anurag Varma. They are raising their twelve-year-old daughter and eight-year-old twin boys in the Bay Area. Monika enjoys writing children’s books to inspire the next generation of social movement leaders and change agents. In these challenging times, Monika is driven to not only fight against injustice, but re-envision and help build the world she wants to raise her children in.