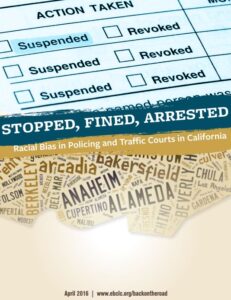 Across the nation, an epidemic of injustice has been exposed – the practice of saddling low income people with traffic fines, fees and penalties so steep they are driven deeper into poverty. Making things worse are the arrests and jail time that often follow, leaving people vulnerable to losing their homes and their jobs.

Now, adding insult to injury, the findings of a new groundbreaking report Stopped, Fined, Arrested – Racial Bias in Policing and Traffic Courts in California released today by Back on the Road California (BOTRCA), a consortium of civil legal aid organizations, reveals dramatic racial and socioeconomic disparities in driver’s license suspensions and arrests related to unpaid traffic fines and fees.