Read the original article at San Jose Mercury News.
SANTA CLARA—A coalition of civil rights groups is threatening to sue over what it calls a lack of minority-owned businesses working on the San Francisco 49ers’ new stadium, though project officials deny those claims and say they gave contractors of all races an equal opportunity to participate.
The budding hot-button issue centers on the racial breakdown of the owners of companies that won dozens of lucrative contracts to build the $1.2 billion Santa Clara stadium, a tricky proposition in a state that has banned affirmative action. 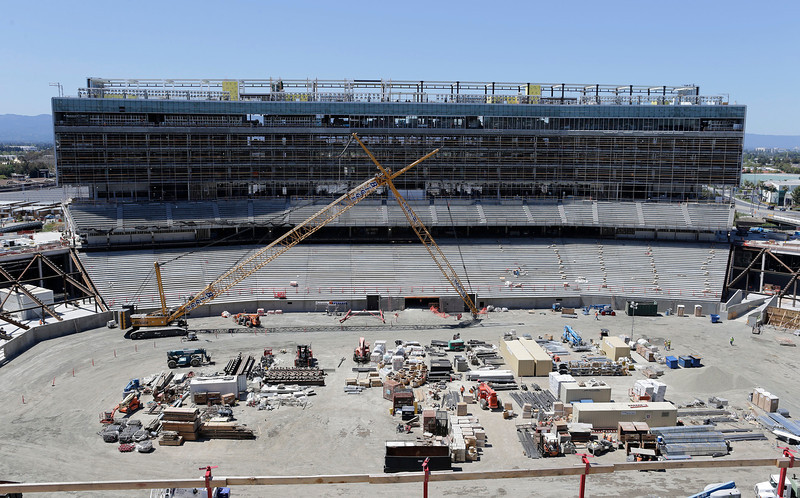 On one side is a consortium of civil rights lawyers with a history of suing public agencies, along with groups that promote black and Latino contractors and other businesses. In a letter to the city of Santa Clara, the 49ers and NFL last Friday and in interviews this week, they said they could not find any minority-owned companies working on the project and argued that black-owned firms should have gotten more of the construction contracts largely because African-American players are behind the team’s success on the field.
“Our (black) children are why you’re building the stadium — to make more money off of these players,” said Long Beach-based attorney Everett Glenn, president of a nonprofit advocacy group for black athletes. “It’s time we share in the harvest. What do we get out of this industry?”
But project officials said that under Proposition 209, an anti-affirmative-action law passed by California voters in 1996, they were required to be “color blind” when they selected the firms that won roughly 60 public subcontracts worth more than $700 million. Those contracts range from plumbing to electrical work to steel fabrication and were awarded over the past two years to firms owned by people of a variety of races and ethnicities, city officials and developers said. But they could not provide specific examples.
New York City-headquartered Turner Construction and Milpitas-based Devcon Construction, the main developers, said they followed the law and the procedures laid out by the city and 49ers when picking subcontractors. While they were still researching the issue of minority-owned firms in response to the group’s letter, they noted that more than half of the 1,000-plus workers on site are members of minority groups, amounting to more than half a million hours of employment after a year on the job.
“Turner Construction Company is proud of its relationships with local trade unions and minority-owned business contracting firms throughout the country,” Turner and Devcon said in a joint statement. “We have been and will continue to be fully open to minority participation on this project.”
The civil rights groups charge that project officials should have specifically reached out to minority-owned businesses to let them know of the stadium contracts. They claim the opportunity to apply for the bulk of the work zipped by the minority-owned contractors without their notice between summer 2011 and fall 2012.
“We depend upon the relationships we have established with developers and large general contractors to do adequate outreach,” said Derek Barrett, president of the Northern California chapter of the National Association of Minority Contractors, which also signed the letter.
Dave Hatheway, a consultant representing the city on the project, said project officials were worried about running afoul of Proposition 209’s “color blind” policy by reaching out to minority-owned contractors separately, creating a quota for them or even tracking the race of the owners that won contracts. Instead, they advertised the availability of contracts by posting an ad in the small Santa Clara Weekly and relied on publicity about the project, which produced an outpouring of response from large and small firms from around the country.
“The stadium was on everybody’s radar,” Hatheway said. “It wasn’t news to anybody that there was a stadium being built in Santa Clara. So most companies contacted Turner-Devcon.”
The 49ers declined to comment.
Glenn and Sellstrom also claim to have the Revs. Jesse Jackson and Al Sharpton behind them, though representatives for the two activists’ organizations did not return emails seeking comment.
The letter that threatened the lawsuit was also signed by the Lawyers’ Committee for Civil Rights. The group has filed grievances and lawsuits against several other public agencies on a variety of issues in the past and previously threatened to sue Santa Clara over its process for electing City Council members.
Oren Sellstrom, the legal director of the San Francisco-based group, said it waited until now to fire off a letter on the 49ers stadium, which is 40 percent complete and set to open in 2014, because it hadn’t previously been aware of any problems with minority contracts. In recent weeks, he said, his firm cross-checked the list of subcontractors with federally certified, minority-owned companies and could not find any.
“We still think there is time to fix the problem for any remaining work that needs to be done,” Sellstrom said, “as well as future contract opportunities.”