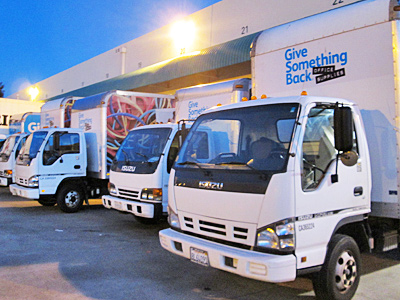 Getting a job is hard enough, but getting a job with a record for a conviction or an arrest is even more difficult.
That’s why a group of lawyers, advocates, and business owners in Alameda County have banded together to create “A Good Hire.”
A Good Hire is a campaign to help hiring managers get over some of their inhibitions about hiring convicts and make it easier for people with records to find jobs.
According to the group, more that one-in-four adults has an arrest or conviction record, usually for old or minor offenses. That is an estimated 375,000 people in Alameda County.
A Good Hire points to people like Bill Gates and Richard Branson who have records. Sure, not everyone with a record goes on to be a titan of industry like those two,  but that doesn’t mean they can’t be hard workers who deserve job opportunities.
Meredith Desautels is an attorney with the Lawyers’ Committee for Civil Rights of the San Francisco Bay Area.
For years Desautels has worked with people with records to try to help them find jobs.
Job seekers can go to that group’s Second Chance Legal Clinic for tips on background checks, how to fill out applications, and how to clear up old records.
And now Desautels and A Good Hire are reaching out to business owners to help them see the validity of candidates with previous records.
“There is a huge untapped pool of talent in Alameda County,” said Desautels. “We thought we could do more to reach out to employers and create ‘fair chance’ employment opportunities.”
One employer that hires  former convicts is Michael Hannigan, president of Give Something Back Office Supplies.
Give Something Back is California’s largest independent office supply company.
They  have several locations locations, including their headquarters in Oakland and a warehouse in San Leandro.
Hannigan, who has a masters degree in criminology from UC Berkeley, says he doesn’t hesitate to hire people with checkered pasts and that often they are his most dedicated workers.
“We put a priority on filling jobs with people who might have obstacles to opportunities,” said Hannigan. “If two applicants come in and one has a record and the other doesn’t, they will be equally considered.”
That philosophy of fairness is a core tenet of Hannigan’s business. Give Something Back is modeled on the Newman’s Own line of charitable products, with profits being channeled to local charities
Hannigan says that if an applicant is competitive, there is no reason a past conviction should hold him back.
The job application at Give Something Back doesn’t include a section asking about criminal history.
After someone applies, all the candidates that look good are put in one group. That’s when the background check happens.
If something pings on the background check, Hannigan and his management crew won’t throw someone out of competition, they’ll just carefully consider the situation.
Hannigan says that, for example, if someone has a history of arrest for reckless driving, they might not be a good fit as a driver for the company, but that doesn’t preclude them from being hired for another position.
“We always consider the risks, but most situations work out for us,” said Hannigan. “Many people wind up in jail for things that aren’t necessarily speaking to the core of their character. It can be a mistake that they continue to pay for.”
Hannigan says that he has about 90 employees at his Alameda County facilities and right now 5 or 6 are ex-convicts, but it’s not something that is publicized around the office.
Hannigan says that not everyone he hires with a record works out, but that’s true of any new employee.
“We’ve had misfires, but no more turnover with those employees relative to any others,” said Hannigan.
A Good Hire is looking to reach out to business owners and human resource directors all over Alameda County to help them get educated about hiring people with records.
Check out www.agoodhire.com for more information.
CAPTION: The delivery trucks are ready to be loaded at the Give Something Back warehouse on Alvarado Street. The office supply company is the largest in California and has a policy of being open to hiring people with past criminal records.
PHOTO BY AMY SYLVESTRI