Helping a community recover after a tragedy

In late January, a massive fire in San Francisco’s Mission District left a community reeling. In addition to the devastating impact on residents there, the four-alarm blaze displaced 36 small businesses.
Many of the affected merchants—predominantly immigrant, low-income sole proprietors, including artists, restaurants, shops, delis, and others—were the lifeblood of the local business community. Unfortunately, they were left dealing with the immediate impact of losing their income streams and livelihoods.
Over the past month, the Lawyers’ Committee, in collaboration with community partners as well as the Office of Economic and Workforce Development of the City of San Francisco, has been working to advise business owners on their rights, options, and next steps.
Last week, our Economic Justice Team conducted a “Know Your Rights” training for small business tenants affected by the fire, and we recruited an insurance attorney to meet with merchants at City College—Mission Campus. Over 30 individuals showed up to the training, and 14 signed up for legal services through our Legal Services for Entrepreneurs program. 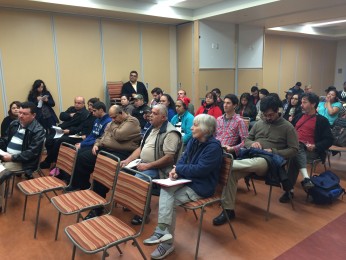 We were concerned to hear of the difficulties many business tenants have had with their insurance companies. Two merchants in particular, both monolingual Spanish-speaking, shared their stories.
One restaurant owner, whose business was destroyed by the fire and who was denied coverage on an insurance policy he’s been paying for over 10 years, described his anxiety. He told us that he has no money for expenses, and he supports not only his family here, but his and his wife’s families in El Salvador.
Another restaurant owner explained that she had just taken out a loan to buy hundreds of thousands of dollars of large equipment for her recently acquired Peruvian restaurant. But the equipment was completely destroyed in the fire, and she is unsure how to file a claim with her insurance company.
Orrick, Herrington & Sutcliffe LLP, as a pro bono partner of LCCR, has agreed to take on the two above clients for full-scope representations against their insurance companies.
Additionally, the Lawyers’ Committee is working on gathering leases, providing counsel and advice, matching individuals for lease reviews as they move into new spaces, and assisting the City and our community partners with triaging the various issues arising out of this difficult situation.
Our hearts go out to all of the people affected by this tragedy. In its wake, we are proud to be a part of the community response—a response that has in many ways brought out the best of the San Francisco Bay Area.