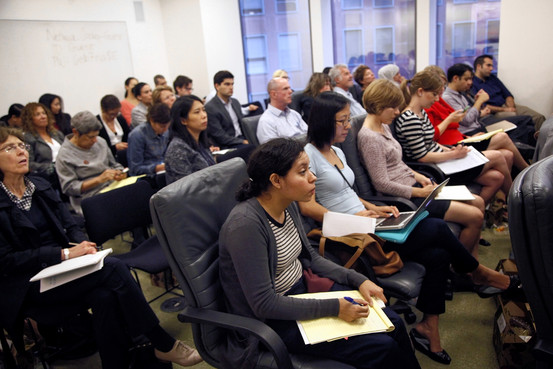 Lawyers are trained at Cooley LLP in San Francisco on representing minors who entered the U.S. illegally. Preston Gannaway for The Wall Street Journals

In a departure from their usual clientele, attorneys at major U.S. law firms and corporations are volunteering to represent, at no cost, unaccompanied children who have entered the U.S. illegally.

Since late July, when a wave of Central American minors surged at the border, lawyers who regularly bill hundreds of dollars an hour have been packing training sessions to learn immigration law and take on the children’s cases. Legal-aid organizations call it an unprecedented response by this group of attorneys.

The effort leaves the firms open to criticism from conservative activists who say the minors should be returned to their home countries. But the attorneys say the children, who aren’t entitled to a public defender, have a right to due process.

Rachel Ehrlich Albanese, a corporate-restructuring attorney at Akin Gump in Manhattan, said she was dismayed when she read that the government had created a “rocket docket” to expedite deportation of the children, many of whom fled violence and endured a dangerous journey to the U.S. “I have a heart and I have two kids,” she said.

Such attorneys—many of them experts in the intricacies of bankruptcy, tax or real-estate law—often face a steep learning curve when it comes to a Central American child’s rights under U.S. law.

This summer, Ms. Albanese joined about 20 attorneys at a training session offered by a legal-aid organization to learn about asylum and other forms of legal relief available to such children. Ms. Albanese acknowledges she is in an unfamiliar legal territory and will need mentoring.

More than 66,000 unaccompanied children—mainly from Honduras, Guatemala and El Salvador—traveled to the U.S. in the first 11 months of the fiscal year ended Sept. 30, nearly twice the previous year’s rate.

After being apprehended at the border, minors are processed by the federal government and released to relatives or friends across the U.S. while they await deportation proceedings.

Having a lawyer can make a significant difference. Nearly half of all minors represented by attorneys in the past decade won permission to remain in the U.S., according to a report by the Transactional Records Access Clearinghouse, a project at Syracuse University that gathers and analyzes federal data. For those without legal representation, nine of 10 were returned to their home countries, the study found.

Mark Krikorian, executive director of the Center for Immigration Studies, which favors cracking down on illegal immigration, said representing unaccompanied migrant minors is “good PR for corporate lawyers” who should be concerned first about poor Americans.

The law firms say their attorneys do volunteer legal work for a number of causes, including animal rights, same-sex marriage and other hot-button issues.

Sen. Charles Grassley (R., Iowa), regarded as tough on illegal immigration, said, “Attorneys and their firms pick and choose pro bono work all the time, so it’s their prerogative if this is where they decide to put their resources.”

By taking on the cases of immigrant minors, “we are not doing anything political,” said Los Angeles-based David Lash, who runs the world-wide pro bono program of law firm O’Melveny & Myers. “Our job is to ensure these children have access to justice. Without a lawyer, they don’t have due process.”

Ellyn Josef, pro bono coordinator at Vinson & Elkins, said the Houston firm hasn’t felt pushback from clients for representing undocumented immigrants. Its latest booklet for clients on its pro bono work describes a young girl who fled El Salvador and won the right to remain in the U.S., thanks to the firm.

Simona Agnolucci, a San Francisco lawyer specialized in complex litigation who is representing tech giant Google Inc. in several cases, volunteers at an immigration court each Thursday. She screens immigrants without legal representation to assess whether they have a viable asylum claim for a pro bono attorney to take. “I am fortunate to have clients in favor of this work,” said the Keker & Van Nest lawyer. Google said it had nothing to add to her comments.

Some Democratic and Republican elected officials recently urged corporate lawyers to represent the children. California Attorney General Kamala Harris, a Democrat, convened meetings with law firms, legal-aid providers and others in Los Angeles and San Francisco this summer in a call to action.

At a Houston event in July focused on the rights of the migrant minors that drew 500 people, the chief justice of the Texas Supreme Court, Republican Nathan Hecht, urged corporate lawyers to step up.

“The court cannot take sides in the dramatic political, social and humanitarian aspects of the crisis,” he said. “Our job is to guarantee that the laws will be applied equally, fairly and efficiently to all alike.” More than 100 attorneys in attendance signed up to represent a minor.

The federal government has recently taken steps to help unaccompanied minors, announcing $9 million for two refugee groups to provide legal assistance to 2,600 of them, but the effort is small compared to the effect of legions of private-sector lawyers taking on pro bono cases.

Maria Mitchell, legal director for Catholic Charities in Houston, said that pro bono interest in unaccompanied minors has jumped 300% over last year in her region, including from in-house lawyers for companies including Exxon Mobil Corp. , BP PLC and Halliburton Co.

In Los Angeles on Aug. 13, Kids in Need of Defense, a legal-aid organization, offered training at the firm Gibson Dunn that attracted about 50 attorneys. “We had to reconfigure the tables to seat more people than we had expected,” said Katie Marquart, the firm’s pro bono director.

More than 200 attorneys attended training in July in San Francisco offered by Legal Services for Children. The legal-aid group trained attorneys at Baker & McKenzie, while the Lawyers’ Committee for Civil Rights offered training at Cooley LLP.

San Francisco’s Keker & Van Nest is providing administrative support and office space to nonprofit groups representing refugee children, and its own lawyers have committed more than 1,000 hours of pro bono representation. The firm also recently announced a $60,000 grant to be split between two legal-aid organizations.

Typically, legal-aid organization attorneys interview a child, draft memos about the case and find a pro bono attorney to take it. The organization then mentors the corporate lawyer throughout the proceedings.

But understaffed legal-aid organizations are overwhelmed with cases that they first need to screen. In addition, “most of these lawyers are highly skilled, but they have never represented a child and need a lot of support,” said Abigail Trillin, executive director of Legal Services for Children.

Veterans of pro bono immigration work say it takes getting used to.

“As an attorney accustomed to the orderliness of corporate practice, my biggest challenge was dealing with the chaos of family court and immigration court,” said Richard Horstman, who retired two years ago from Marathon Oil in Houston.

But Mr. Horstman, who has taken on 19 minors’ cases in recent years, said the work is enriching, and gives lawyers a broader view of the world that helps them with their corporate work. The first unaccompanied minor he represented, a Guatemalan boy who made it to the U.S. after several brushes with death at the hands of gang members, is now studying engineering, he said.

Recently, Ms. Albanese, the New York attorney, agreed to represent a Guatemalan boy who she soon will meet for the first time. “If you respect the principles of our justice system, you can get involved without reservation,” she said.

Write to Miriam Jordan at miriam.jordan@wsj.com