Create a Fair Roadmap to Citizenship

Create a fair process that respects human dignity and family unity, and allows immigrants to remain in the United States and become citizens. Provide equal protection to lesbian, gay, bisexual, transgender, intersex, and queer (LGBTIQ) families. The path to citizenship should be broad and inclusive, and not exclude potential beneficiaries on grounds such as past deportation orders, minor crimes, or prohibitive fees. Factors such as rehabilitation after an offense committed in the past should be considered. The path also should not include long wait periods or excessive documentation requirements, and should provide a meaningful status and protection during any wait time for legalization. Additionally, the path to citizenship should not be contingent on border security measures or outcomes.

Enact measures to provide a fair process at all levels of the immigration system. End all removals without a hearing before an immigration judge and provide access to meaningful judicial review. Restore discretion to consider individual circumstances, such as long-term residence, family and community ties, work history, and rehabilitation, in all removal hearings. Allow waivers for all grounds of inadmissibility and removability. Eliminate reinstatement of removal.

Eliminate dragnet enforcement programs, such as Secure Communities and 287(g), which facilitate civil rights violations and undermine public safety. Oppose the addition or expansion of grounds of removal. Reform deportability grounds so that fewer non-violent or otherwise low-level offenses are the basis for removal. End excessive use of detention, including mandatory and prolonged detention. Prohibit racial and ethnic profiling or other similar discrimination in enforcement. 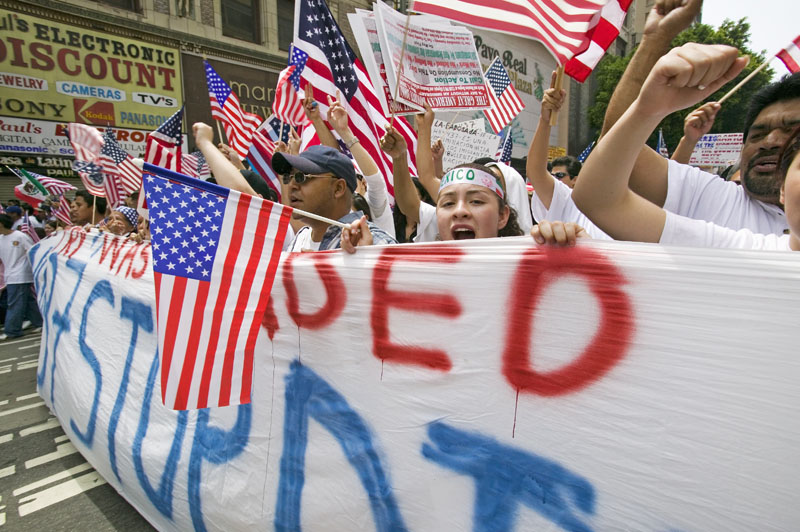 Transform border enforcement by establishing safe and efficient ports-of-entry that promote public safety. Enhance oversight and accountability of immigration enforcement agencies at the border in order to uphold civil and human rights for border communities and border-crossers. Ensure due process rights for all border-crossers and border-region residents by limiting the use of detention, prohibiting racial profiling, and increasing access to counsel and ensuring a fair judicial review process. End wasteful and inhumane overreliance on criminal prosecutions of immigrants, including Operation Streamline and other indiscriminate prosecutions of those crossing the border without authorization.

Recognize the rights and protection for all workers, without regard to immigration status, including for day laborers, domestic workers, agricultural workers, trafficked persons, and others who have historically been excluded from labor protections, in all areas, including wage and hour, health and  safety, antidiscrimination and anti-exploitation, and the right to organize. Reject the use of faulty electronic employment verification systems, such as E-Verify, which have unacceptably high error rates, invite discrimination and improper terminations, push workers into an underground economy where abuses are prevalent and are costly to government and employers. Expand protections for all workers, including greater safeguards against discrimination, due process violations, and other abuses.

Continue the Tradition of Being a Welcoming Nation of Immigrants

Increase legal immigration avenues for workers in all sectors of the economy to come to the United States and family members to reunite with each other. Eliminate the three-year, ten-year, and permanent bars. Provide all immigrants with equal access to health care and other public benefits programs. Address the root causes of migration by revising current development, trade, and international policies to stimulate fair development and economic growth in developing countries and address human rights violations abroad. Eliminate the draconian one-year bar to asylum and bring U.S. asylum law into conformity with international refugee and human rights standards.