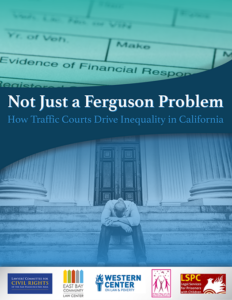 Over four million Californians are without a valid driver’s license, not because they pose a risk to public safety, but because they are trapped in a spiral of court fines and fees they cannot afford to pay, according to this report. In addition to driving-related citations, infractions such as littering, sleeping outdoors, and failure to pay a transit fare can result in excessive fines that, if unpaid, result in criminal warrants or suspended driver’s licenses and create a vicious cycle of poverty.