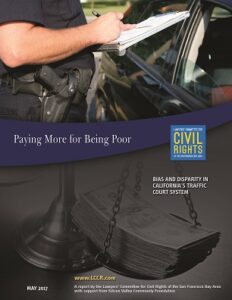 Paying More for Being Poor: Bias and Disparity in California’s Traffic Court System

A new study released by the Lawyers’ Committee for Civil Rights of the San Francisco Bay Area, Paying More for Being Poor: Bias and Disparity in California’s Traffic Court System, shows that Californians pay some of the highest fines and fees in the country that create hardships for many middle-class Californians and devastate the lives of Californians with lower incomes. Because of over-policing in communities of color and racial profiling, African-American and Hispanic individuals are more likely to receive traffic tickets and are far more likely to be cited for driving without a license without also being cited for an observable offense. New Bay Area data also reveals that African-Americans are four to sixteen times more likely to be booked into county jail on a charge related to inability to pay a citation.